Naked at The Pyramids: These Artists Stir A World of Controversy With Nude Photos

Nude model Marisa Papen went on a huge adventure in Egypt and created this beautiful photostory. 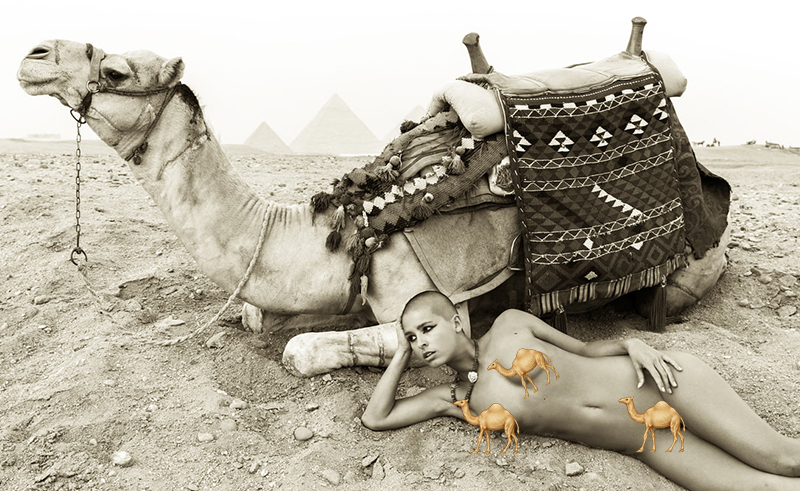 Artists have been trying to capture humans in their purest forms since the beginning of time. Renaissance artists would depict us as strong and powerful, Baroque artists would depict us as humble and meek, modern artists depict us as beautiful and elegant, and in almost every art form since ancient Egypt has depicted mankind nude. 21st century artists, photographers especially, have been using nudity, not only to show how beautiful the human form is, but also how innocent it is. Unfortunately, in religious countries like Egypt, the usage of nudity in art is not just neglected, but also frowned upon.

Marisa Papen and Photographer Jesse Walker had an interest in ancient Egypt and wanted to create a photographic story showing what Egypt would have looked like before the Nile at the plateau ran dry. The project, like all their previous ones, would capture ancient Egypt in all its glory, accented by a nude Marisa, in all her glory. Due to Egypt’s religion, culture, and current political situation, they knew they were in for a challenge, but nothing could have prepared them for their adventure in Egypt.

On their 15 day trip in Egypt, they gave bribes, got harassed, followed, and even at one point imprisoned. Marisa tells the full story on her blog of how Egyptians, specifically men, reacted to her trying to take these photographs. When they first arrived in Egypt, they immediately felt uneasy. “The air was remarkably dry, my nose and lips felt dolorous. It would take us one hour to get to the hotel, I was staring out of the dusted window listening to prayings on the radio...” Marisa shares on her blog. Their first morning was filled with catcalls and wolf whistles until they found an isolated place at the plateau where they could take a few photographs. They had only managed to take a few snaps before two turbaned men caught them. Though Marisa doesn’t speak Arabic, it was easy for her to understand that the men were angry, luckily for her, Jesse gave them a 20 dollar bribe and they were off.

On their way back to their hotel they met a local guide who owned two horses and a camel, who was reluctant to help them at first but eventually agreed. He took them to the plateau every day at dawn and dusk and freaked out several times without anything crazy happening.

Their second stop was the iconic Karnak temple in Luxor where it was overflowing with people, so the team hid until it was almost closing time. When the temple was empty, Marisa stripped down and started dancing. Marisa shares “Dust swooping up underneath my soles while making pirouettes in Cleopatra’s footprints. The thought that probably no-one ever danced in their birthday-suit between this time and hers made me only spin faster.” But they were busted once again and this time a 20 dollar bill wasn’t going to get them out of it.

Four security guards arrested them in the middle of the temple. Luckily, Jesse was able to delete the photographs before the officer could take a look at the camera. They told the policemen that they were testing the light and hadn’t taken any photos yet. The policemen, not buying their story, threw them in jail. They spent the rest of their trip going form court room to court room and from cell to cell. Lucky for them they were left with a warning.

Be sure to check out the full story here.