The Man In The High Castle: Episode Three

Diving deeper into the television adaptation of The Man in the High Castle, Emad El-Din Aysha delves into an analysis of the third episode and shows us how the show just keeps getting better and better. Spoilers ahead obviously. 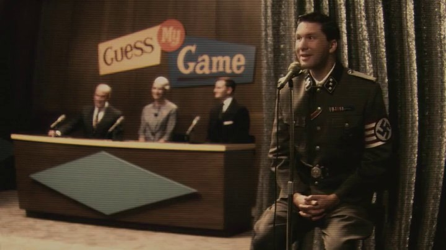 What can I say about The Man in the High Castle (2015)? After my initial review of the show (see here) - it just keeps getting better!

Every episode ends in a cliffhanger; the events keep you on the edge of your seat; there are additional layers of the plot to peel away, and interestingly memorable characters. I just watched the third episode – The Illustrated Woman – and the thematic hints are beginning to bubble to the surface.

Deeper Down the Rabbit Hole

Here the Japanese Crown Prince and his wife come to San Francisco with the Japanese Science Minister, while Juliana and Joe are busily trying to hide the body of the SD agent they killed as the so-called Marshal (Burn Gorman) comes to Canon City looking for the same man. It’s a small town so it does not take long for this self-appointed officer of the law to put two and two together. In the meantime, Juliana and Joe discover what – and who – the SD man was after.

Back in San Francisco, Frank Frink is forced to sign out the bodies of his poor sister and her kids – gassed to death for being half-Jewish – but he can’t even bury them. They’ve been listed as enemies of the state who will be cremated. Frank snaps on the inside and decides to take matters into his own hands, convinced of the futility of the resistance. He goes from loyal citizen to terrorist outlaw. Imagine that!

Like I said, never a dull moment; very nicely written and directed, too. The setting is indicative in its own right. People aren’t that friendly in Canon City, America’s conservative heartland, and are all too eager to rat each other out – check out the albino black American who gives the Marshal the information he needs – giving you a not-so-nice image of the supposedly idyllic small town American. Having the snitch be an albino (neither black nor white) is a hint at his treachery and the blurred moral state of the neutral zone, neither entirely with one side or another. There was a civil rights reference in the first episode; Birmingham, Alabama is mentioned, the location of the famous black students school protest in March of 1963.

Reading into the Past’s Future

The Marshal is a throwback to the days of Wild West justice, where might quite literally makes right. While following up leads he finds out that the local bookstore owner (Rob LaBelle), a man who sells smuggled Bibles, is an escaped concentration camp prisoner. The Marshal not only kills him by stringing him up for the birds to peck at him, he snips off a finger and takes it as a trophy. (The ‘lynching’ has obvious cultural significance for Americans, but may also be from Philip K. Dick’s The Hanging Stranger, also set in small town America). The bounty hunter also makes sarcastic remarks about the stink of the bookstore, clearly not a man of letters.

Trump Card: The Marshal about to claim his latest victim. One man’s terrorist is another man’s freedom fighter.

More significant still is the pack of cards that the Marshal has in his pocket, with faces of people to track down and eliminate. This is a clear reference to the American war on terror, since there were the “most-wanted” deck of playing cards with faces of Al-Qaeda members and members of Saddam’s regime. Other hints abound. The Nazis interrogate a resistance fighter with LSD, a reference to the famous LSD mind-control experiments the CIA carried out. Later the man lies and claims one of the SS men is his contact, and they almost kill the officer – one of their own kind. There are no allies in this uber-suspicious world, not unlike modern-day post-9/11 America. 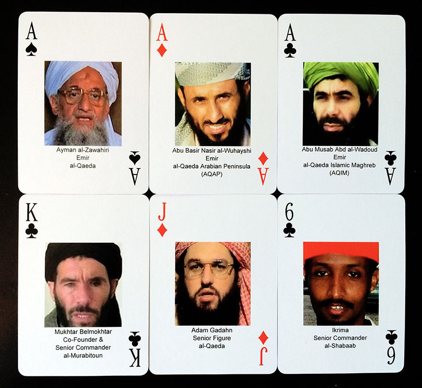 Another hint in this regard is the diner owner, Lem Washington (Rick Worthy). He turns out to be a resistance figure himself and a Muslim to boot! You find this out when the Marshal orders pork chops. He asks Lem ‘Washington’ (hint, hint) how he can serve that stuff when his religion forbids it, and he replies that he’s only not allowed to eat it. Live and let live, in other words.

I still insist, however, on interpreting all this in a British manner. Here’s the biggest hint of all: you have the Crown Prince telling his wife how worried he is about the Nazis, given how technologically ahead of the Japanese they are. He also says that Japan is, at the end of the day, an island nation that is losing its grip on its colonies. That sounds like a very Englishl-y reference to the empire on which the sun would never set. You feel that Ridley Scott is trying to tell the Americans to learn from the British past and how they lost all their colonies. It is the fate of empires to crumble.

The production standards are even higher than I thought at first. Canon City is about as dilapidated as you can get, as is Frank’s apartment. Portraying decay and urban sprawl is one of Ridley Scott’s specialties, from Blade Runner to American Gangster. But, again, look a little closer and you begin to ‘notice’ things. The Canon City’s state is thanks to the fact that its own inhabitants don’t really see it as their home – they have no stake in it. Notice that the diner Juliana works in is called the Sunrise Diner, no doubt to please Japanese tourists. 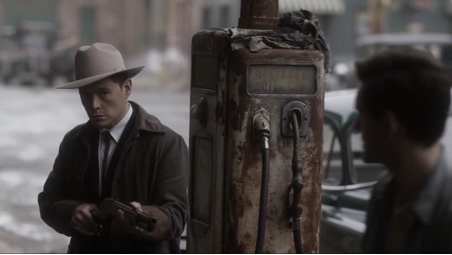 Dilapidated America: Nothing like a little rust to tarnish the squeaky clean image Americans have of themselves.

As for Frank, there are works of art strewn all over the place, meant to signify the Bohemian lifestyle he ‘chooses’ to live - probably the only thing he has any power over (the art is all distinctly European, too, with classical statues – he hasn’t been culturally imperialised by the Japs, and he makes his own pickles). Kudos to the casting, too. Burn Gorman is a mean little runt; it’s not just the cowboy outfit but his small stature. He’s someone who ‘feels’ big by allying himself with the stronger party, the Nazis (there’s a character like him in the original novel, Robert Childan). The man playing Frank, Rupert Evans, it turns out is British, which would explain the good character acting.

Artist to Anarchist: It's amazing what nice people will do when pushed too far.

Japan’s Crown Prince (Daisuke Tsuji) has beautiful almond-shaped eyes and Rufus Sewell, as Obergruppenführer John Smith, is the quintessential bug-eyed monster. But John Smith – what an annoyingly American name – is no simpleton. He’s courageous in battle, very good at his job, and a generous and loving father to boot, which makes the drama all the more complex and harrowing. The light and camera angle also really elevate the show.

It’s a beaut of TV series and a must-see for Americans to learn about themselves through Ridley Scott’s Phildickian mirror! 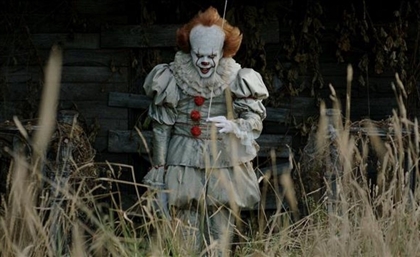 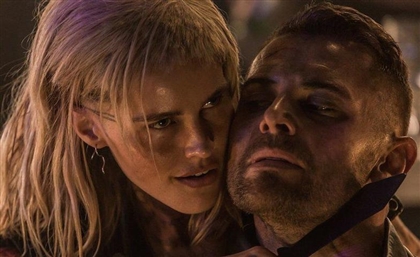 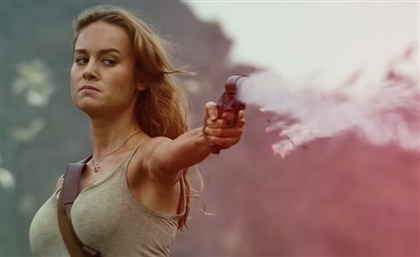 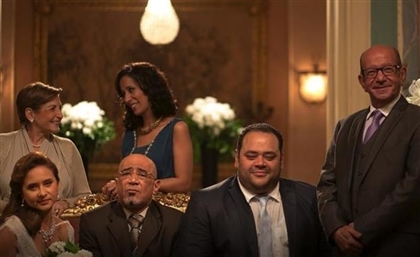 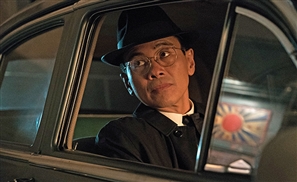 The Man In The High Castle: Episodes 9 and 10

Tying up the loose ends, Emad El-Din Aysha wraps up his series on the television [...] 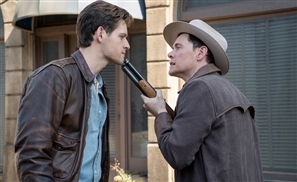 Spoilers ahead as Emad El-Din Aysha takes on two more episodes of The Man in the [...]