Scale Up to Green: The Ins & Outs of Changelabs’ New Egypt Accelerator

In what is the first accelerator of its kind in Egypt, Changelabs are looking to tap into the startups and entrepreneurs pushing eco-change.

For certain generations, the idea of ‘going green’ has aimlessly loitered in spaces fought for by NGOs, governments and the odd eco-warrior, battlefields that have - more often than not - left few standing. It’s an even worse tale of woe in Egypt, a country blighted by aridity, lack of arable land, pollution and population distribution so uneven and skewed that it belies belief.

With a growing and evolving ecosystem of innovators and vanguards, however, Om El Donia has never been better positioned to actually do something.

This sentiment is at the heart of Changelabs’ Scale Up to Green Accelerator, the first of its kind in Egypt. As one of the leading impact-centred accelerators operating in MENA, Changelabs have made a habit of pushing the envelope when it comes to the very core of the concept of the accelerator. For Changelabs, it’s not simply about accelerating - it’s about accelerating to impact.

This first-of-a-kind programme is no different and is looking to ride the wave of a renaissance in eco-activities and what the Changelabs team says is a pipeline of early-stage startups that hold the key to a greener future. To be precise, the accelerator is targeting three specific areas under the umbrella of tackling energy and resource efficiency: green energy, agritech and resources. More than just fast-tracking these startups, SMES and solutions, the accelerator also seeks to address a fracture in the ecosystem.

“While the Egyptian ecosystem is one of the most robust in the MENA region, and accelerators and VCs are everywhere, there’s a huge gap in the scale-up and operating segments of the startup support menu,” said Karim Samra, CEO and founder of Changelabs. “We aim to bring together the right stakeholders to fill that gap, in Egypt and beyond.”

It sounds like a simple fix, but it certainly isn’t. So, how do Samra and co. plan to fill said gap? By doing, learning and iterating - three key actions that will carry the accelerator into having the desired impact.

WHAT HAS CHANGELABS TARGETED?

Improve the quality and efficiency of food growing, processing, delivery, or distribution - and helping meet a changing global consumer.

Companies helping to use the earth’s limited resources in a more efficient and sustainable manner, including water.

WHAT ARE THE PILLARS OF THE PROGRAMME?

Sharing knowledge and expertise has always been at the core of Changelabs’ programmes and this accelerator will include hands-on workshops led by regional and global experts, alongside inspirational talks. One key element is one-on-one office hours, which give participating entrepreneurs time with mentors, subject matter experts and, most interestingly, ‘entrepreneurs in residence’ - men and women who have and are going through similar experiences.

Valuing free-thinking and initiative, Changelabs is set to provide an exclusive and extensive resources library that includes templates, videos, learning exercises, and thought leadership. Entrepreneurs will be given weekly assignments, deliverables and deadlines, though the library includes much more outside of these talks, including templates for a large range of documents that any scale-up might need.

This is where the real action happens - it all builds to this, an important - though not necessarily totally defining - factor in measuring development. The programme’s live pitch sessions have been designed to mimic the classic elevator-style pitch, though there will also be the opportunity to deliver a 6-minute-plus pitch as if speaking to customers and investors. The live pitch sessions will take place every Thursday, which will see the judges rank and offer feedback.

Networking can be a vague, nebulous wasteland of awkward encounters, but it’s also an integral part of learning and succeeding. As such, Changelabs is set to host a string of social events that aim to break the ice between participating entrepreneurs, experts and the Changelabs staff. 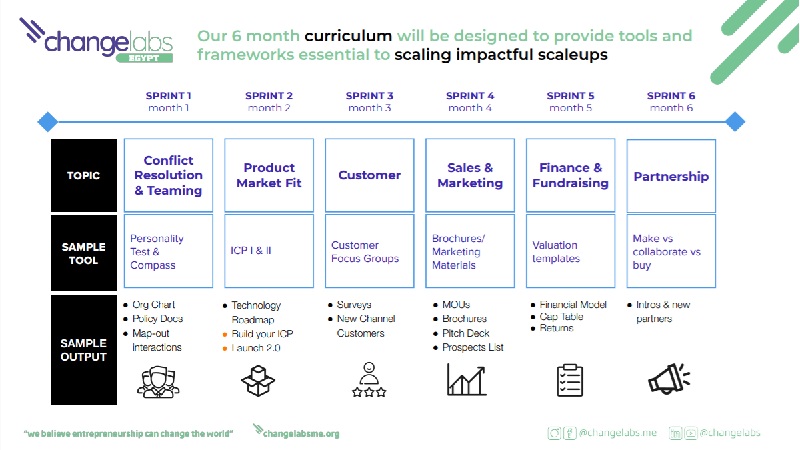 The programme has been established in collaboration with a number of different, influential entities, including the IMF and Deutsche Bank-backed Green Growth Fund, while partners include the EU’s  EU4Energy initiative, Amazon Web Services (AWS), and MINT by EGBank. 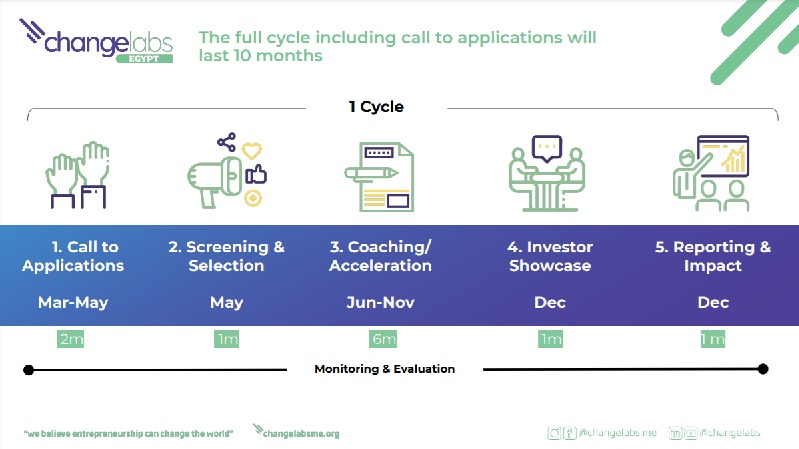 Applications are closed and the time for decisions has arrived. Choosing who will be taken into the programme is never a simple a task, but there stands a golden (or green) opportunity for the Egyptian startups set to be involved, as they take a first step to achieving their green ambitions.

Find out more at Changelabs.org.

Go Green With Some of Egypt's Most Sustainable Brands

In honour of Earth Day, we’ve compiled a list of our favourite sustainable Egyptian [...]

According to the minister, leading concerns involve ice caps melting and the [...]
Week Month Year