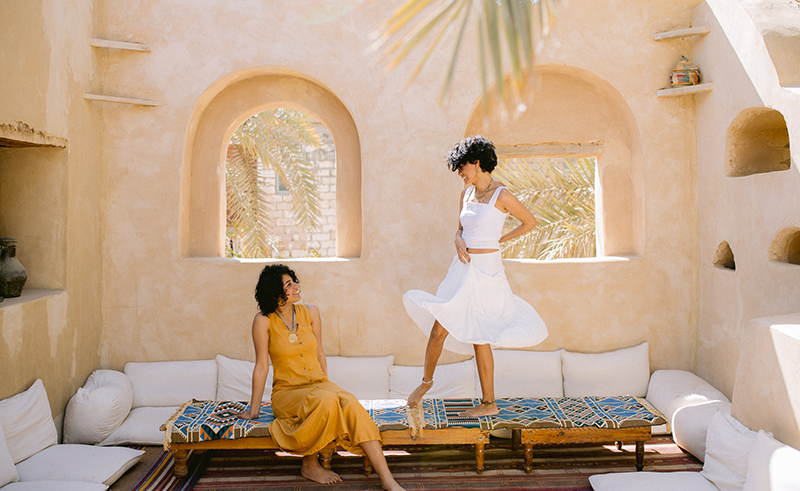 We roam around the same few bars, the same handful of coffeeshops and restaurants, and it can all get quite humdrum-y. So for those that have wandered across the Cairo borders, and for those that yearn to but never quite plan it out, here’s some inspiration to get you going.

Fufa, the Egyptian fashion brand founded by Farah El-Ashiry, has embarked on a theme that’s inviting all to peer into the hidden wonders of Egypt. With each year’s overarching theme drawing inspiration from different cities in Egypt, starting with Fayoum last year, this time the mesmerising Western Desert city of Siwa is paid homage to with a collection titled ‘Al-Siwiyah’.

“When we first arrived in Siwa to research and scout, we just had no idea what to expect," El-Ashiry told Cairo Scene. "We were met with this virtuous culture, with its own language, traditions, colours and aesthetics...just so different from what’s around."

From the distinct colour palettes, to the indigenous North African language Amazigh (berber), Siwa is brimming with symbols and aesthetics that are versed in the city’s history and lore.

Fufa’s Al-Siwiyah is crafted with almost entirely all-natural fabrics, in-keeping with the its namesake’s native artisans’ ways. In an initiative to keep the representation of Siwa authentic, Fufa would locally produce their items, then send them to the women in Al Wadi (an area near Siwa) to weave their culture’s symbols and motifs on linen and handbags with natural resources such as rope.

“I always wanted it [Fufa] to be more than just about clothes. To collaborate with the women felt great, and to allow them a platform to celebrate their culture and skills was equally rewarding for the both of us”, explained El-Ashiry.

Al-Siwiyah’s colour palette pays ode to quite the interesting sliver of Siwan culture. Using yellow, orange, red, olive green and black, the colours reference the change of a date’s colour shades, from it’s growth, from yellow, to a more ripe orange/red, and then olive/black for when it goes bad.

In a blend of promoting tourism as well as inventive fashion, Fufa has grown to be more than just your average fashion brand. “We ran into a tourist couple on our first scout in Siwa that was lost and ended up stranded in Siwa on their way elsewhere. Just from how magical the place is, they stayed for a week with no plan and just soaking in the place’s enchanting scenes”, El-Ashiry recalls.

Al-Siwiyah runs for the whole year, with a collection curated to each season. Fufa has released a spring collection, followed by a Ramadan kaftan collection, and are now rolling out their summer pieces.

El-Ashiry teased a soon-to-be released swimwear collection in part of Al-Siwiyah, with similar colour palettes and symbols to Fufa’s spring and summer collections, which would be the brand’s first entry to swimwear.