“No One Will Tell You That You Can Do It.” Coterique’s Founder Demystifies Female Entrepreneurship

At 22, Dana Khater has built a fashion platform with clients in Los Angeles, Montreal, and Dubai. As she re-launches her brainchild, Coterique, the entrepreneur talks going global, being a female boss, and how 'Cotigirls' might change the way people shop. 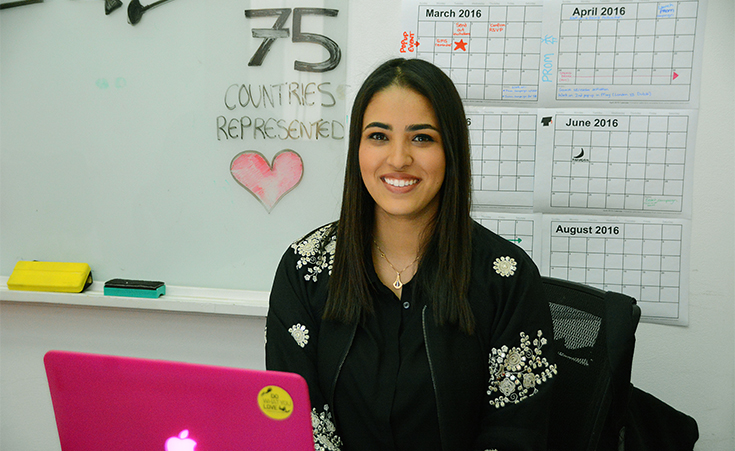 Dana Khater’s office is bustling with pink and yellow sticky notes hanging on walls. Behind the big desk that presides in the room, the calendars, lists of designer brands, and fashion week cornerstones are impossible to ignore. On the following table, a mix of slick blazers, reptile bags, and chic designer purses pile up. Much like Anne Hathaway roams across aisles as she directs her e-commerce platform in The Intern, Dana Khater seems to be on top of it all. But, instead of a huge office set in the heart of Manhattan, she is based in the much less glamorous Middle East, and valiantly runs the entire startup on a team of three.

We’re at the heart of Cairo’s Dokki, two steps away from the Nile and one door away from the room that would see a 19-year-old Khater apply for an incubation programme for her startup, Coterique, at Flat6Labs. Back then, the startup was a restless idea she had conceived while running a university fashion magazine. “My mom had once suggested that, if I was so crazy about working for a fashion magazine, I should start my own. And the idea stuck in my head, so one year later I did it,” she says.

Launched while she was doing her first year of engineering at the American University of Cairo (AUC), her first project – Vitrina – recruited some of the most prominent would-be icons of Egypt’s fashion scene: Hadia Ghaleb, Zayneb Azzam, and Rawda El Ziki. “It was really cool because none of the fashion companies in Egypt at the time were creating content from the region; they just duplicated content and spoke about the Oscars. At the same time, there were emerging designers like Malak El Ezzawy and Amina K, so we would organise shoots and style their products. It was very experimental,” the young entrepreneur recalls.

That’s where Coterique was born as an idea. “We did a lot of shoots, we once pulled off a 24-hour shoot in Aswan,” she says. But picking up the items from the different boutiques and signing receipts for 100,000 LE worth of products was too much of a risk for Khater, who came up with her e-commerce idea right at the end of a frantic shopping spree. “It was a Thursday night and I had to go from Heliopolis to Zamalek, to Giza, to Garden City, and everyone was waiting in Kattameya to style the stuff. So I thought ‘holy shit, we need to find a website where you can browse all the boutiques and shop online',” she says. 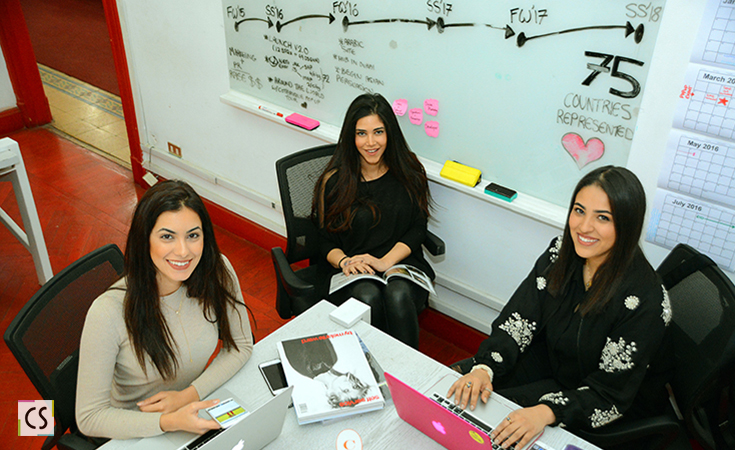 Browsing online for incubation programmes, she bumped into a Fla6Labs call and closed it the second she read the word ‘tech’. “But my mom, who was sitting next to me, pushed me to apply. She is always the pushing force in the background; she doesn’t like when societal expectations get in the way and she believes in leadership,” she says as she recalls that, in this room we’re sitting in now, she’d meet her future investors. “The first thing they told me was to find partners and drop out of school. I tried looking for partners, but I was not going to drop out!” she exclaims.

After finding a team of developers, Coterique was born in March 2013 and quickly began receiving orders from abroad. “It was right after the 2011 revolt, so the stores were not selling; they had a lot of stuff sitting on the shelves. If you are a store with international designer clothes in Cairo, you cannot reach the world, but we could. So we spoke to them,” she explains, determined and confident. But in 2014, a trip to Japan would shift Khater’s perception and turn the startup around. By then, she had shifted careers and began studying economics, and decided to take a semester abroad. While taking a weekend trip to South Korea, the entrepreneur was blown away by independent designers whose talent and creativity seemed like a hidden gem. “They were not using social media to sell; they didn’t even have a website. All they offered me was their email,” she comments in shock.

“The problem with this ‘female entrepreneurship’ discussion is that some women think that someone needs to come and tell them: here, go, you can do it. It needs to come from within."

So on the flight back to Cairo, she decided the website would shift into a platform that represented these young designers and give them space to showcase. “I was finishing university, so I was also considering what to do with my career,” she recalls. “I knew I wouldn’t dedicate my entire life to selling dresses, but I would definitely dedicate it to helping young designers."

The result – the freshly re-launched Coterique – gathers designers from countries as diverse as UAE, Georgia, USA, Canada, Turkey, Philippines, and Serbia. The company's designer expert, Aisha Abou Yousef, scouts through fashion weeks and trade shows, researching for promising talents though graduating lists from universities, on Instagram, and through Coterique's freshly launched network of brand ambassadors: the 'Cotigirls’. One of them, Egypt’s favourite top model and beauty blogger Zayneb Azzam, is also the brand’s PR Manager. 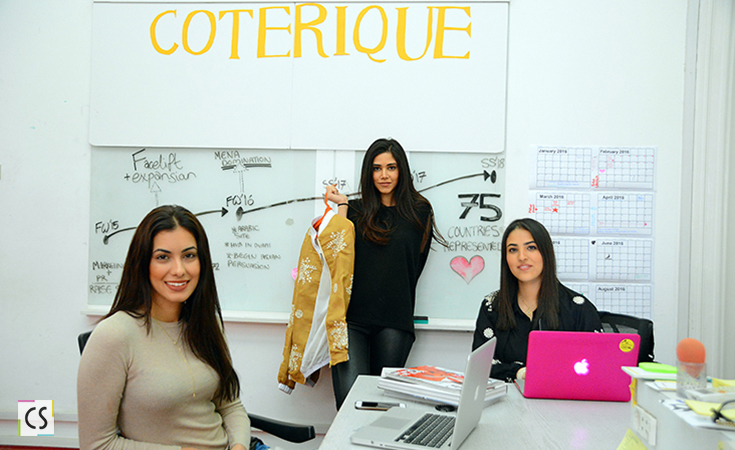 “I still personally call every designer after every time we get an order and tell them where their piece is going,” says Dana Khater.

“We are investing in having a network of people on the ground who are real. It’s not about having social media influencers promoting you; that is going to die soon because the authenticity is not there. We’re talking about real fashionable girls who will be organising events on the ground, scouting for designers, and handling different pop-ups. They will be our eyes and hands and ears across different countries,” Khater explains.

The site, says Khater, stretches way beyond the scope of e-commerce, becoming a fashion hub for clients and fresh designers to cross paths. “We are creating content that designers can use whenever they like, and we are marketing them; we take care of operations and payment so that they can dedicate all their time to designing and producing,” she adds. Through DHL services, Coterique can send an item from anywhere in the globe to a customer for a fixed price, wherever the client is.

Having kicked off with a seed fund of 70,000 LE, Khater went bootstrapping for the past two years, as her platform sold 300 items, rounding a monthly 50,000 to 70,000 LE. Today, 40 per cent of her customers are in Egypt and 40 per cent in the GCC Gulf countries, with the rest spread across the globe. In 2015, she was listed amongst CairoScene's 25 under 25 – the entrepreneurs driving Egypt's startup revolution.

"I am lucky to have started young, so I can afford to have a job that doesn’t pay me. I wouldn’t be able to do this if I was a 28-year-old guy."

“When I see the requests at our call centre, I think ‘wow, we have all these people calling from all over the world using this thing that was initially only an idea,” Khater says.  And a revolutionary idea, at that. While, in hegemonic nations, launching a startup with a global goal may seem rational, venturing into international e-commerce from the depths of a peripheral country – and one still staggering at the aftermath of a social uprising – is nothing short of revolutionary. But to her, being a woman does not elicit a different story to tell.

“The problem with this ‘female entrepreneurship’ discussion is that some women think that someone needs to come and tell them: here, go, you can do it. But if you look at the most successful people, sometimes they have a chip on their shoulder, and it is often that drive that pushes you forward a lot more. No one tells you ‘you can do it’. It needs to come from within,” Khater affirms. “We all have supporters, but they are not cheering us on 24/7. In the hasty times, it needs to come from you. You are going to be the one who wakes up, even though you had a really bad day, and say ‘I am going to do this'.”

Staying on top of the game doesn’t seem like a challenge for this 22-year-old boss, who manages an international team and single-handedly deals with couriers, clients, and designers without batting an eyelash. “How do I do it? I don’t watch TV,” she jokes. “Well, I also consider myself lucky because, as we work with high-end fashion, we don't need to sell 5,000 products to break even; also because being an online company means I can operate from anywhere in the world. And I am lucky to have started young, so I can afford to have a job that doesn’t pay me. I wouldn’t be able to do this if I was a 28-year-old guy,” she says. 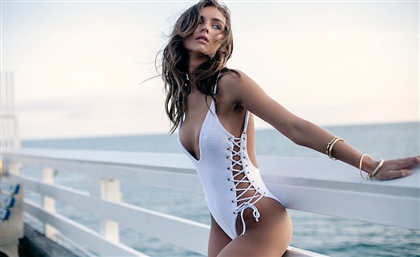 From halter necks to crochets, we're listing THE 7 hottest trends to show off your [...] 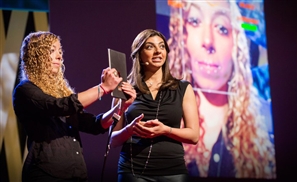 The company, created by Rana El Kaliouby, has been making waves around the world [...] 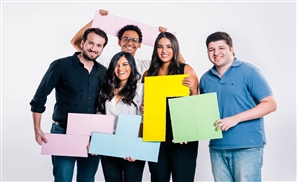 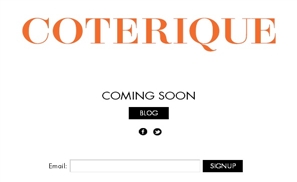 Just when you thought that, between the Easter break and Sahel season, you could [...]
Week Month Year