“Don’t Ever Say that Your Life Has No Meaning”

Around 15% of Egypt's population includes people living with disabilities but the country is ill-equipped to handle their needs. Valentina Primo speaks to Helm, an NGO which assists persons with disabilities achieve employment and accessibility, about challenges, social stigma, and the road ahead. 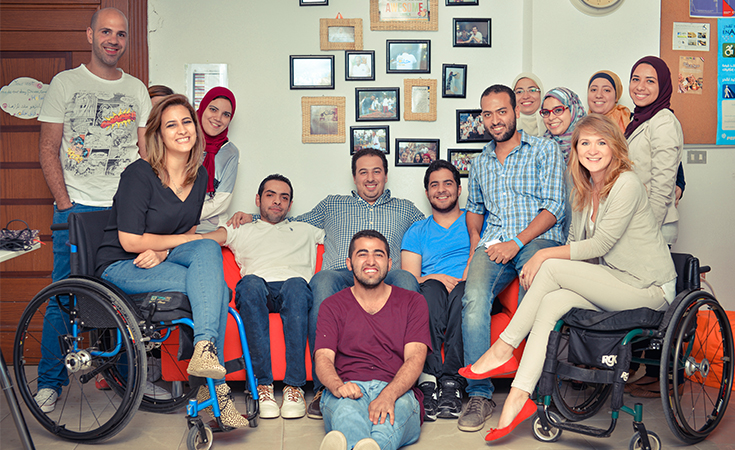 “Don’t ever say that your life has no meaning. Nothing is impossible and there is no end. Whatever the trouble, we have to face it,” says Tarek Salem, who is sitting on a wheelchair. His words acquire special resonance as he pulls out a leather tool from his fanny pack. He skillfully opens a Velcro, wraps it around his hand, and places a spoon inside its pocket to demonstrate how he manages to eat despite not being able to move his fingers. “I invent these tools myself,” he says.

It has been almost ten years since Salem started using a wheelchair. After an accident he had when diving into the Mediterranean Sea in Alexandria, his back broke and he was left paraplegic, unable to move his legs and fingers. But he began inventing ingenious tools for his everyday life, which today he uses for different activities, from shaving to lifting weights at the gym. The 30-year-old inventor also works as at Vodafone, where he monitors antenna towers, and volunteers at Helm, an NGO that promotes the full inclusion of people with disabilities in Egypt.

"Nothing is impossible and there is no end," says Tarek Salem.

Sitting next to him is the nation’s second best wheelchair tennis player, Mahmoud Yossef. A former Kung-fu instructor and an athlete, Yossef broke his back after the microbus he was riding fell from October Bridge in Cairo, in 2010. A few days later, he was sitting on a wheelchair for the first time.

“I couldn’t run, but I began to train and train until I began competing in wheelchair tennis,” says the athlete, who is ranked as Egypt’s top second player. “I recently participated in tournaments in Holland and Kenya,” he adds with a smile. After his coach introduced him to Helm, he landed a job in Vodafone, where he works as an HR administrator. “But I am going for more: I want to be the world’s top player,” he says.

The champion and the inventor met at Helm, a pioneering Egyptian non-profit organisation that focuses on facilitating the employment of persons with disabilities and ensuring that private and public premises are accessible to them.

“Persons with disabilities are practically locked up because of social barriers. People often do not realise that the physical environment affects everything they do; so despite the fact that there may be jobs and schools for them, if they cannot take a bus or make use of a sidewalk, they cannot access that space,” says co-founder Amena El Saie.

El Saie met her partner Ramez Maher in their early ages at school, and after discovering a common concern, joined forces to found the NGO in 2010. “We were discussing the problem and didn’t know where to start, because disability is such a big word; there are a lot of branches,” Maher explains, “In Egypt, people with disabilities face many obstacles in their everyday life, from transportation and education, to accessible locations, discrimination and rejection.”

Amena El Saie is the co-founder of Helm, the Egyptian NGO that has assisted 2,500 persons with dissabilities in the past four years.

After consulting with experts and carrying out extensive research, the entrepreneurs decided to focus on employment, not only by working with people with disabilities, but also by advising companies. “Initially, we started looking into restaurants and factories and managed to secure jobs for 300 people. But then we realised there is a huge barrier between the employer and the person with disability,” says Maher. “We knew there was a gap, but we didn’t know what that problem was; so we collected data from both sides of the equation and tried to understand the difficulties companies face; because it’s not just about hiring people with disabilities, but also retaining them,” El Saie adds.

According to Egyptian law, companies with more than 50 employees are obliged to have 5% of people with disabilities among their staff. “But the real problem is that nobody teaches them how they can implement it, so what ends up happening is that they are hired on paper and the do not physically go to the company, so it defeats the purpose,” says the young manager, who co-founded the NGO when she was 22 years old.

Helm's premises, in Cairo's Maadi, are the epicenter of their training activities.

Today, Helm boasts of a network of 370 volunteers, and has assisted nearly 2,500 people through their campaigns and trainings. “We brought many people in, so instead of saying ‘we help people with disabilities’, we have a team that is half made up of them,” El Saie says. “We not only train people with disabilities in subjects such as English or soft skills, but also the corporations themselves,” adds project manager Maya Dimitrova.

According to the World Health Organization, 15% of the Egyptian population are Persons with Disabilities (PwD), a figure that represents around 14 million people. “The root of all problems in Egypt is accessibility. People with disabilities here cannot go to school, they cannot access entertainment venues, they cannot have a normal social life; and this is a huge part of the economic failure because they represent a big percentage of the population, both as consumers and for productivity,” El Saie says.

Although aid organisations spend large amounts of money through international funds to fill that gap, they are only providing temporary solution, says the co-founder, as they are not providing solutions for the root cause. “There are schools, but we need to integrate it within the educational system because the problem does not lie with the schools, but with how children get there, as there are no accessibility options. It was only last year, for example, that people with hearing impairment were allowed into universities.”

Added to the lack of infrastructure and regulations, social stigma plays a deadly role amongst persons with disabilities, who are often kept in the shadow of a society who turns its back on them. “Many people acquire a disability after an accident or a disease like cancer, so they have additional struggles that sometimes lead them to attempt suicide. There are also public figures who never announce they have children with disabilities, and they attempt suicide. It’s a major social problem,” says El Saie.

The first prize winner of the Negma Social Entrepreneurship competition in MIT in 2013 as well as the Rise Egypt fellowship from Harvard University, Helm is currently preparing for the launch of a mobile app that promises to be a game-changing solution.

Salem's tools for lift-weighting, which he invents himself.

Set to be launched next December, the phone app will help persons with disabilities locate places that are accessible, from public buildings to companies, cinemas and shopping malls. “Most importantly, we are tackling the core of the problem because we offer client companies consultation so that they can change their infrastructure to become accessible,” says Maher. The reformation plans are customised following the Egyptian Construction Code and based on the Americans with Disabilities Act (ADA).

Aiming to include 200 locations, the app has already garnered the attention of Vodafone, who funds the project, and counts with a database of 89 locations, including multinational companies and some of Cairo's most renowned malls. “We are developing strategies to help companies develop a system where they can integrate persons with disabilities,” Maher adds.

The organisation is also gearing up to set up Egypt’s first biannual conference on accessibility for persons with disabilities, entitled “Cairo 2016: A City for All.” The event, projected to become one of the most important platforms for local and international experts to share knowledge, comes at a crucial time, as Egypt drafts a new law for disability rights. 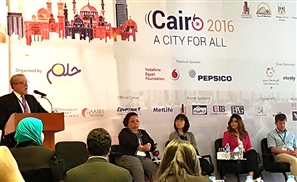 The conference, entitled 'Cairo: A City For All' secured a partnership between the [...] 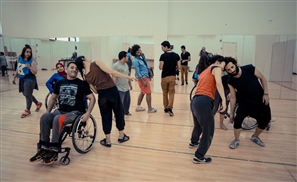 Using performers both with and without disabilities, defying odds and stereotypes [...] 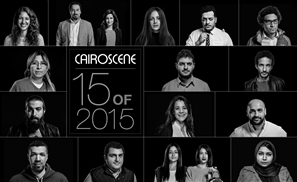