Egyptians have always been proud of their cultural heritage, but unfortunately, for centuries, this heritage has been subject to theft and smuggling to every corner of the world, so it's always good news when some of it is recovered. 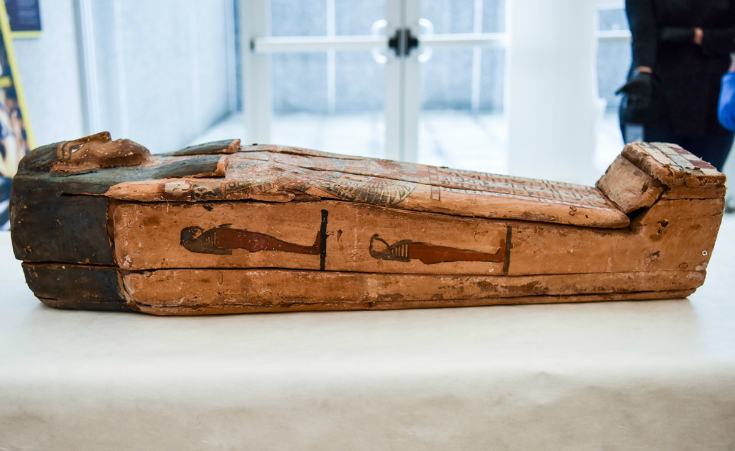 On December the 1st, the Egyptian Embassy in Washington held a ceremony to celebrate Egypt's repatriation of seven ancient artefacts belonging to the Late Pharaonic Period that were smuggled to the U.S., according to Al-Ahram. This came as the outcome of "Operation Mummy's Curse" that was launched by the U.S. Immigration and Customs Enforcement back in 2009 to bust a smuggling network that brought precious artefacts from several countries into the U.S., including Egypt. The U.S. Census Bureau has documented around $26 million worth of artifacts smuggled outside of Egypt in 2016!

"Each of the artefacts returned today tells a story – a human story, our story. History comes alive when someone is able to not only read about the past, but is also able to visit the historical sites, watch and enjoy the artefacts, appreciate the images and see the actual writings of our ancestors," as read a statement from Foreign Minister of Egypt Sameh Shoukry.

And the U.S. isn't the only country from which Egypt has recently repatriated artefacts; some were also returned from Switzerland and the U.A.E.

This black hand arrived wrapped up at the Los Angeles International Airport in January 2013, listed as a sci-fi movie prop. It later turned out to be a mummified hand belonging to an actual 3,000 year old mummy (dating back to around the 8th century B.C). The most frustrating part? As a "sci-fi movie prop," it was valued at $66!

In 2015, four lamps were stolen from the store gallery of the National Museum of Egyptian Civilisation and replaced with replicas. Luckily, two of these have been recovered from the U.A.E., one belonging to Prince Selehdar and the other to Sultan Hassan.

The Coffin of Shesepamuntayesher (U.S.A.)

An Ancient Egyptian coffin is most likely to be found either in the depths of a pyramid or on display at a museum, but this coffin of the 2,600-year-old Shesepamuntayesher was found in a garage in Brooklyn!

The product of Ancient Egypt or kindergarten art class? It doesn't look like your standard piece of Ancient Egyptian history, but it was common for a portrait of the mummy to be placed within the linens of the mummy's shroud. Perhaps this one just needed a more sophisticated artist.

Egypt has repatriated three parts of an ancient limestone-carved stela that belonged to a man called Sheshenefertom, and which were reported missing from Luxor in 1995.

Sarcophagi are the stone coffins used to keep mummies. So that's basically where the mummy of a young ancient Egyptian was supposed to lie.

This set of recovered Egyptian artefacts marks the renewed efforts by Egyptian authorities at recovering Egyptian cultural property and antiquities, the latest of which came as a bilateral memorandum of understanding with Egypt signed by the United States, to impose restrictions on the imports of illicit antiquities into the US from Egypt.