One of MENA’s favourite rappers is back – this time as a producer, too.

In 2017, Sudanese-Twitter and Facebook were abuzz with a circulating video of a young Sudanese man rapping about the struggle of his nation’s people, with incredible intellect and wit. To this day, that video, ‘No Options Left’ still gets mentioned in conversations about the best rap songs to come out of Sudan – and the indelible mark it made on the hearts of Sudanese people and hip hop fans alike.

This artist responsible for it is none other than AKA Keyz, who has come a long way from his debut EP ‘The Seed’. A hit single with Sudanese-American artist Bas, amassing over a million streams on Spotify alone; a feature on American hip hop radio host Ebro Darden’s show ‘Discovered on Apple Music’, and more. 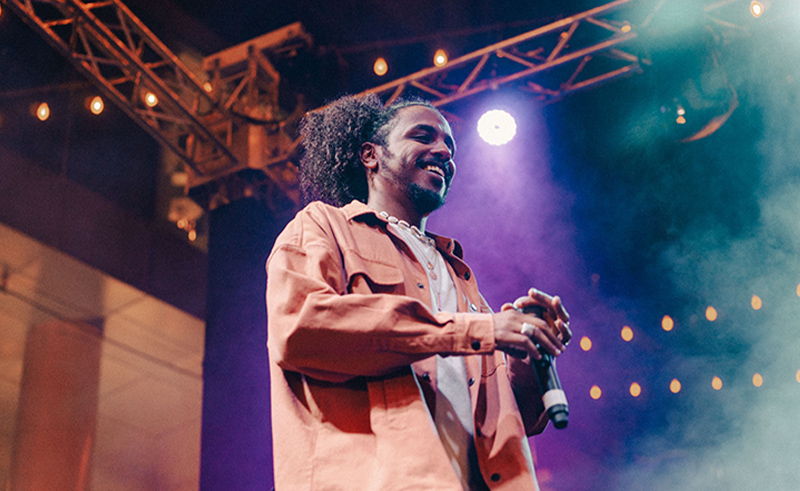 Though mostly renowned for his politically-conscious rap, introspective bars, clever punchlines, and his humble attitude; the artist is also notorious for his frequent hiatuses. In March 2021, AKA Keyz released an album entitled ‘Roots’ to follow his EP ‘The Seed’. For reasons unknown to fans, the album soon got removed from Spotify before it had a chance to fully blossom.

Instead of re-releasing it right away, AKA Keyz took the time to water the soil he planted his dreams in. Aside from a few singles released with rap group ‘The C!rcle’ founded by Aidyproof, Keyz’s fans haven’t seen a solo single from him for a while. With the release of ‘2.0’, it’s clear why – the song features AKA Keyz as producer as well as performer and writer. During his time away, it seems, the artist has been honing his production and engineering skills.

The track kicks in with a beautiful chord and piano-lick, and kicks set at a rhythm that immediately sinks the listener into a vibe. A vocal sample sits underneath the track, leading AKA Keyz in. The mood is all at once introspective, brooding, and moving. With no hook, the song listens as a diary entry or stream-of-consciousness rather than a track, necessarily. This, however, is a nice change for die-hard AKA Keyz fans, who have mostly been receiving more hype tracks from the artist in the last year.

AKA Keyz raps over the beat both smoothly and with intermittent jarring flows. Anyone who knows AKA Keyz’ catalogue can ascertain that his comfort zone-flow is fast and heavily punctuated. ‘2.0’ seems to be the artist’s attempt to challenge himself; taking his time with his words and thoughts, seeing how he can manipulate the flow over his own beat.

The track sees AKA Keyz discussing both his shortcomings and strengths. He delves into his thoughts, his struggles, and his desire to make a change in the world – and that this will never falter. “I’m making a fucking change whether you like it or you hate it/Whether you do or don’t believe it/Whether you open to receiving it,” “All you see is copy cats/Play my whole discography and you’ll see where I Started at/I never tried to alter that.”

The track ends with an outro of the instrumental, highlighting the chords and piano lick once again. All in all, ‘2.0’ is an impressive display of AKA Keyz’s core strengths: writing, mixing, producing, rapping – and provoking thought and reflection in anyone who listens to him.

“Spicy shatta shorty she roll Egyptian loud” has to be one of the hardest lines in [...]
RELATED ARTICLES

Previously flexing his production expertise in '2.0', 'My Girl' is actually the [...]

Best Rap Releases of the Week 50

Keeping you up to date with hip hop in the region - here are our favourite rap [...]

The C!rcle Take on a Funk Sound In ‘Down 2Nite’ Featuring Nadine & YK

The track marks the second release from the Sudanese group’s upcoming album ‘249 [...]

Sudanese Super-Group The C!rcle Want You to ‘Love A Lil’ in New Video

The simple message of the video is to behave better than Tac Plg’s character... [...]
Week Month Year