AMI is Bringing Marble Magic to the Table

Furniture brand AMI is designing stunning pieces that are carved out of solid blocks of funky and colourful marble, bringing their natural beauty into homes, flagship stores, and even embassies.

Marble - few materials match it in bringing wonder and intrigue to the surfaces of our homes. From dazzling veins that dance randomly throughout its cuts to the rich, and deeply fulfilling variety of hues present in its natural beauty - it’s little wonder it shows up on so many high-end walls. Egyptian designer Amina Adnan decided that using it for walls wasn’t her thing; she wanted to create pieces of art out of it through her furniture brand, AMI. Adnan has been shaping marble to create constellations of Turkish Travertine on a summer house rooftop, flashy and funky Green Onyx for an event at the French Embassy, and bulky blocks of Rosa Portuguese at Okhtein’s flagship store at Almaza Bay.

“Marble is unique, no two slabs are ever alike. The visuals, the textures and the vibe it provides to a space are just stunning,” Adnan tells SceneHome. She was raised in Cairo by a half-Saudi father and a half-Lebanese mother, before studying interior design in New York. Adnan then returned to Egypt for a short stint in firms until she decided to pursue other interests. When the pandemic struck in 2020, Adnan began casually designing tables for her friends, and it all kicked off from there. “They can match any interior,” Adnan gushes. “Depending on the mood you can go for something popping and funky, or maybe add some drama. Inside or outside, marble tables are solid, stable, and ageless.”

Weight doesn’t hinder their manoeuvrability, at least with some designs.  “I wanted the pieces to be unique and intriguing conversation starters,” Adnan says. Some of her dining and side tables are carved out of solid blocks of marble, which can weigh up to 400 kilograms. “Many wonder, ‘how did they get here?’ They’re built on site because they can be massive!”

An example of these heavy hitters is AMI’s best seller, a pair of twin coffee tables that come in Breccia Grey marble or White Carrara. “People really liked them in their summer homes, they’re fun and have different heights,” Adnan says. “You can even move them around and create as big of a gap between them as you like.” The twins have round curved legs that discontinue the straight and edgy lines of the tops. “Everyone likes a bit of contrast,” she adds. 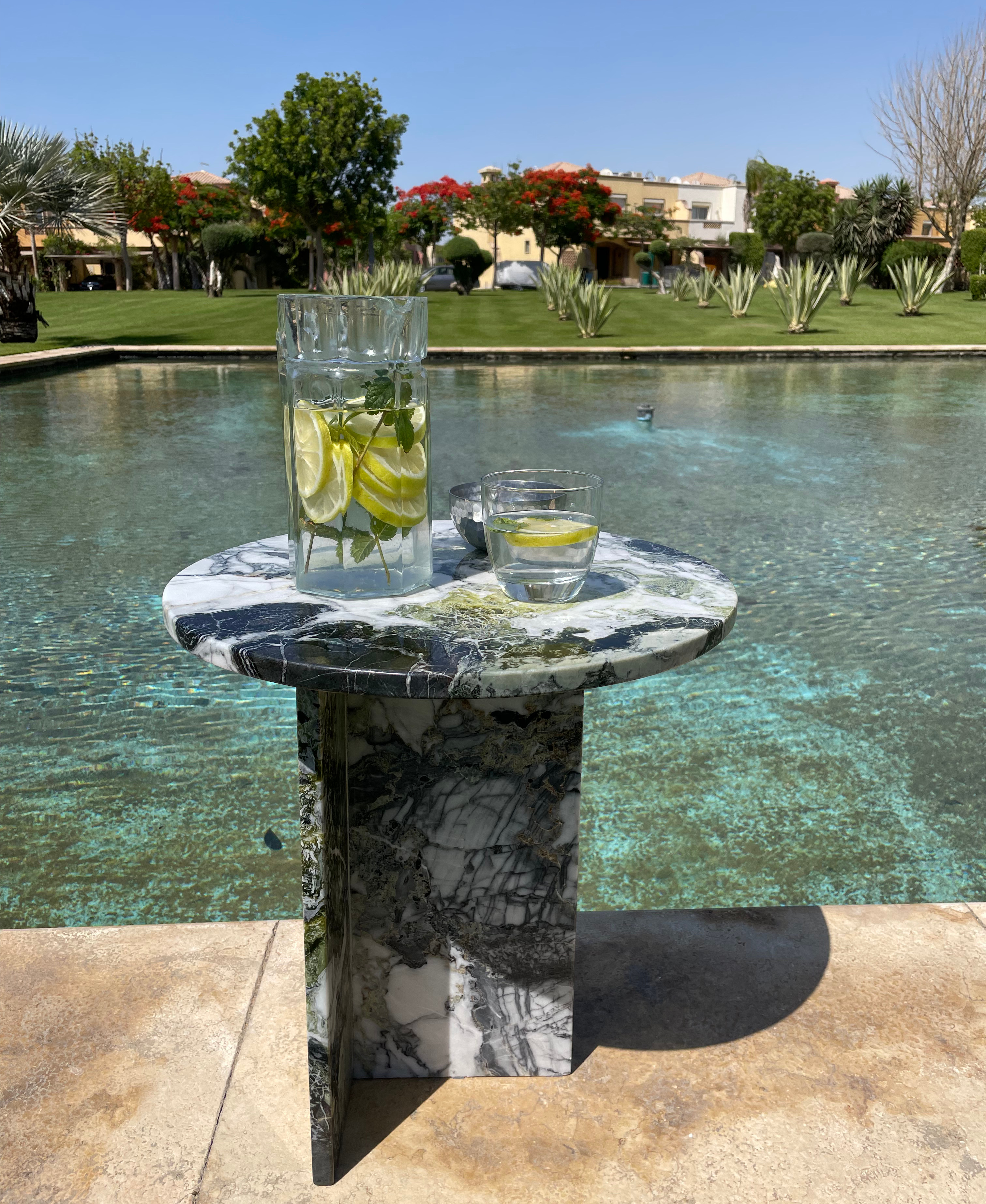 Adnan likes to mix things around, bringing funky pop and neutrality to her designs. Which is what she light-handedly did with an Ice Green marble coffee table which she actually kept for herself after designing. “Its colour was vague yet that was the source of its beauty,” Adnan explains, after using it to place cool lemonade jugs under the sunny, summertime heat. One of Adnan’s former schoolmates and friends approached her to decorate a summer home in Almaza bay. “She wanted something for the roof that was fun and not bland,” she continues. “It began with only Rosa Portuguese side tables, but the space was big so I added Travertine tables around it to create constellations.” 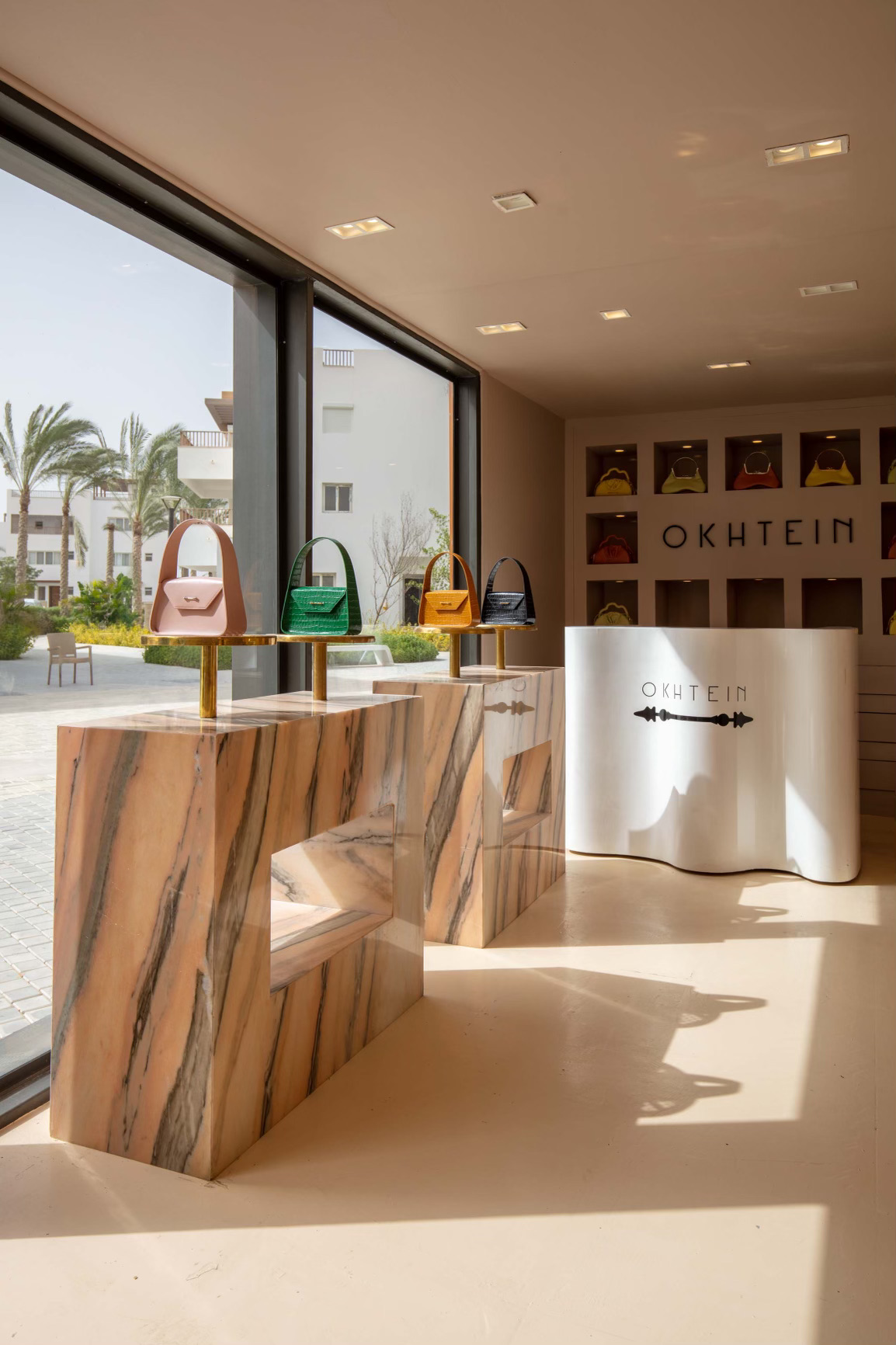 Staying in Almaza, and putting an emphasis on Rosa Portuguese and its pink and greyish green veins, Adnan sculpted bulky blocks into stands that displayed the marvellous fashion of Okhtein in their North Coast flagship store. While at an event in the French Embassy, the designer decided to move away from standard marble with a Green Onyx table that offered a different pop, a flashy green slab that lets light through rests on legs from the same cut. “Onyx is cool,” Adnan says. “It lets light pass through.” 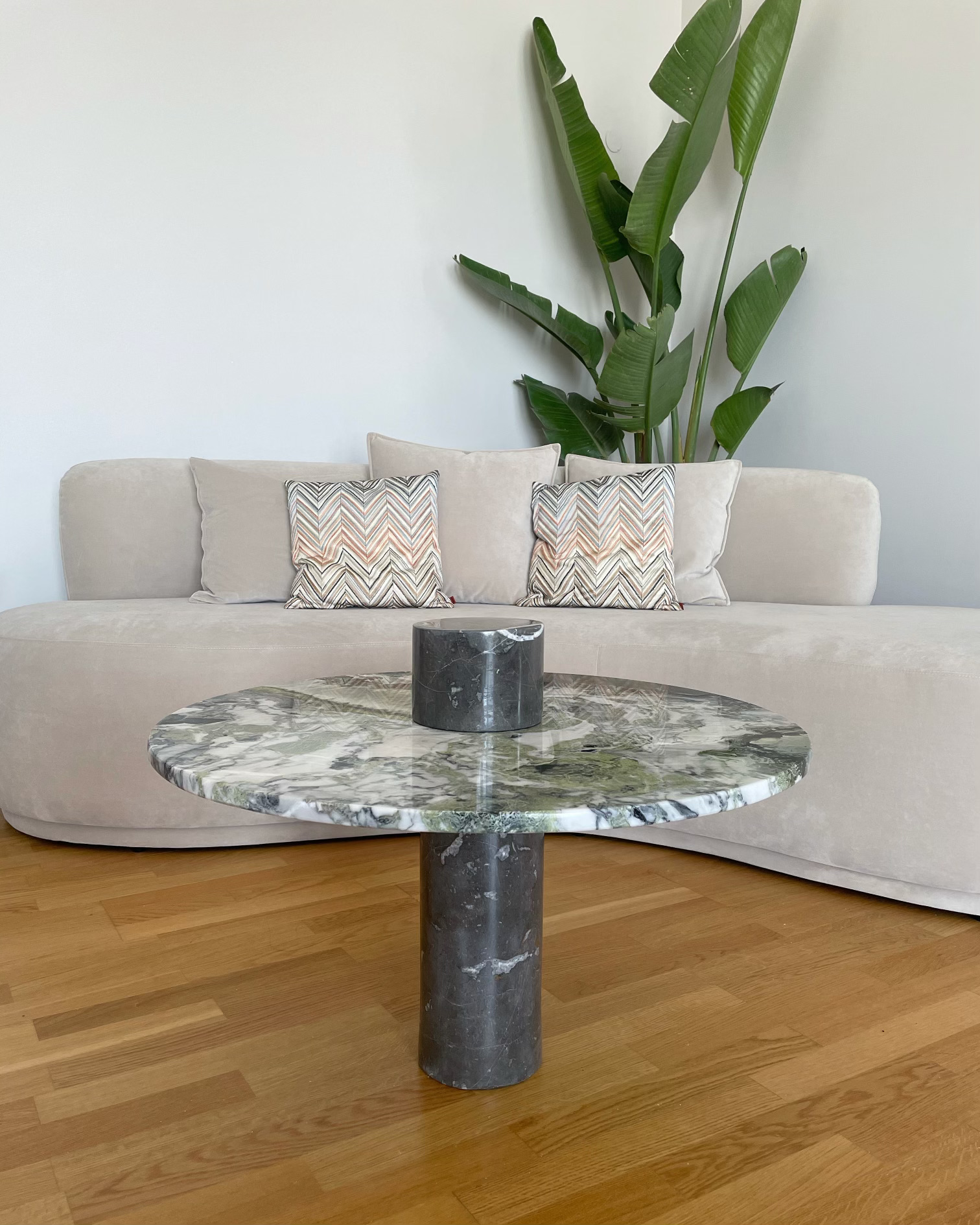 “Some clients want tables that fit their vision, so I make my tweaks and others let me have the full and final say,” Adnan says, referencing the time she used Turkish Travertine stone to create a round, curved and robust coffee table for a client’s living room, blending ever so eloquently with the interior’s beige and crème. “I ask them to send images of the space to pick pieces that match the vibe and suit its colours. I like to be very hands on in my relationship with them. At the end of the day, it’s an investment.”

Recently, the designer noticed that many are going for statement dining tables. In response, she created designs with sleek tops and bulky legs. Pieces that are amazing and instantly become the centre of the space, regardless of any art and decorations that accompany them. Such is the power of sculptured marble and its natural beauty.

Studio Five were given only 48 hours to deliver a proposal for Al Arabiya’s new [...]
Week Month Year