Set to be built in 2023, this mosque by the Mediterranean displays award-winning studio FR Partnership’s affinity for minimalist design.

“Welcome.” The word will first appear as a mirage over a dramatic landscape. Dwellers of beach town Jefaira – namely those in the quiet neighbourhood of Joulz – will trod down a gently sloped hill in 2023 to find a mosque, which will unveil itself with a design that distances it from current architectural discourse. Drawn up by FR Partnership, the mosque’s blueprints display the minimalist studio’s affinity for lean design, leaving all the colour and texture for the dynamic array of bricks that add depth and shadow to its facades. 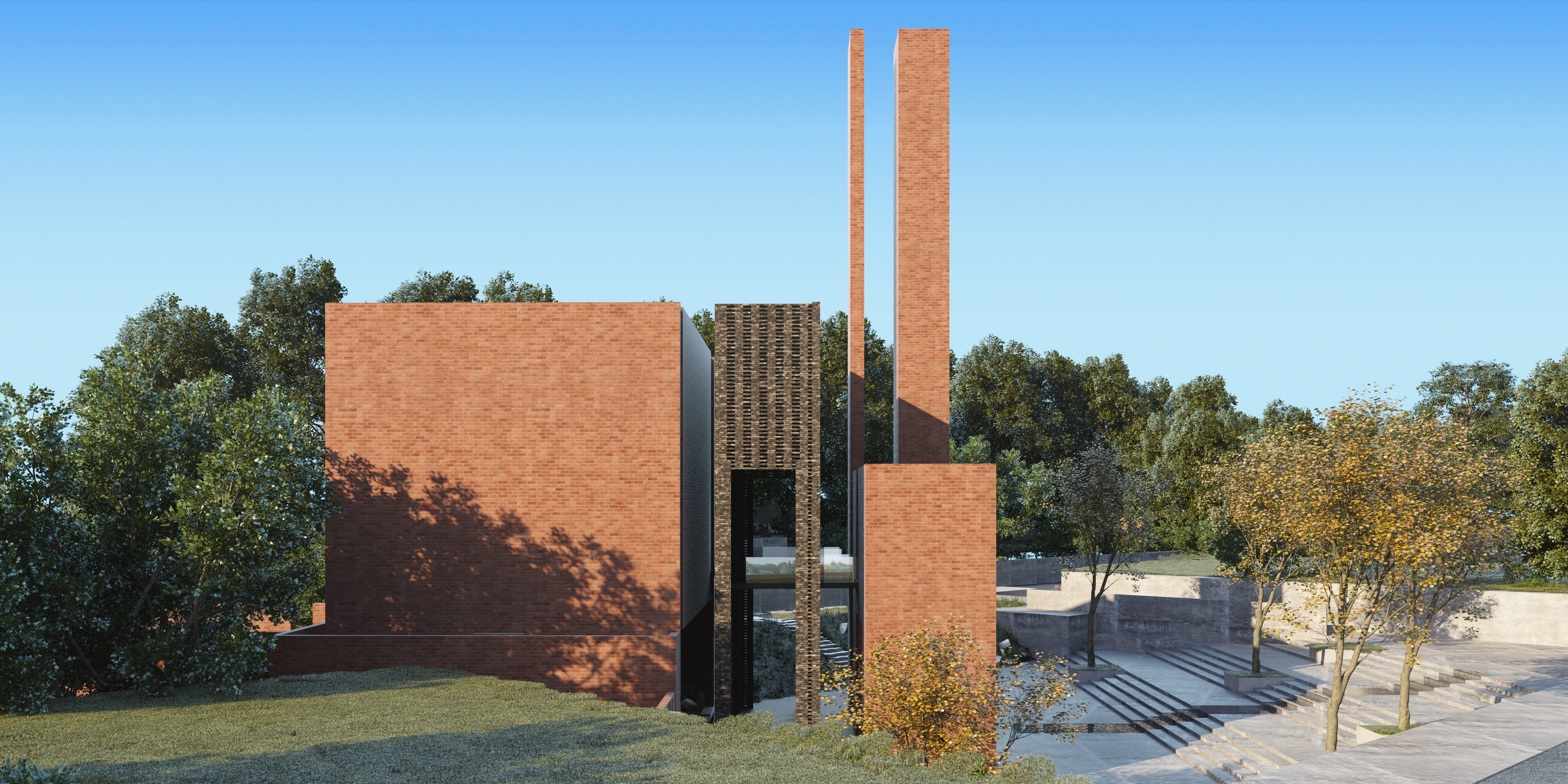 “The design constantly touched upon the tension between man-made buildings and the natural world,” Ahmed Fayyad - the ‘F’ in ‘FR’ - tells #SceneHome. The architect, along with partner Malak Rashad, have crafted a plethora of award winning designs, making them one of Architectural Digest’s top 50 brightest talents in the region. Then again, there is an understated appeal to their form of minimalism, which puts a lot of emphasis on function and experiences.

Here, the mosque’s design features a series of volumes thoughtfully brought together in union, without any contention, aligning the functions together to flow seamlessly and providing an effortless flow within the spiritual sanctuary for worshippers to glide from the ablution space to the mezzanine. 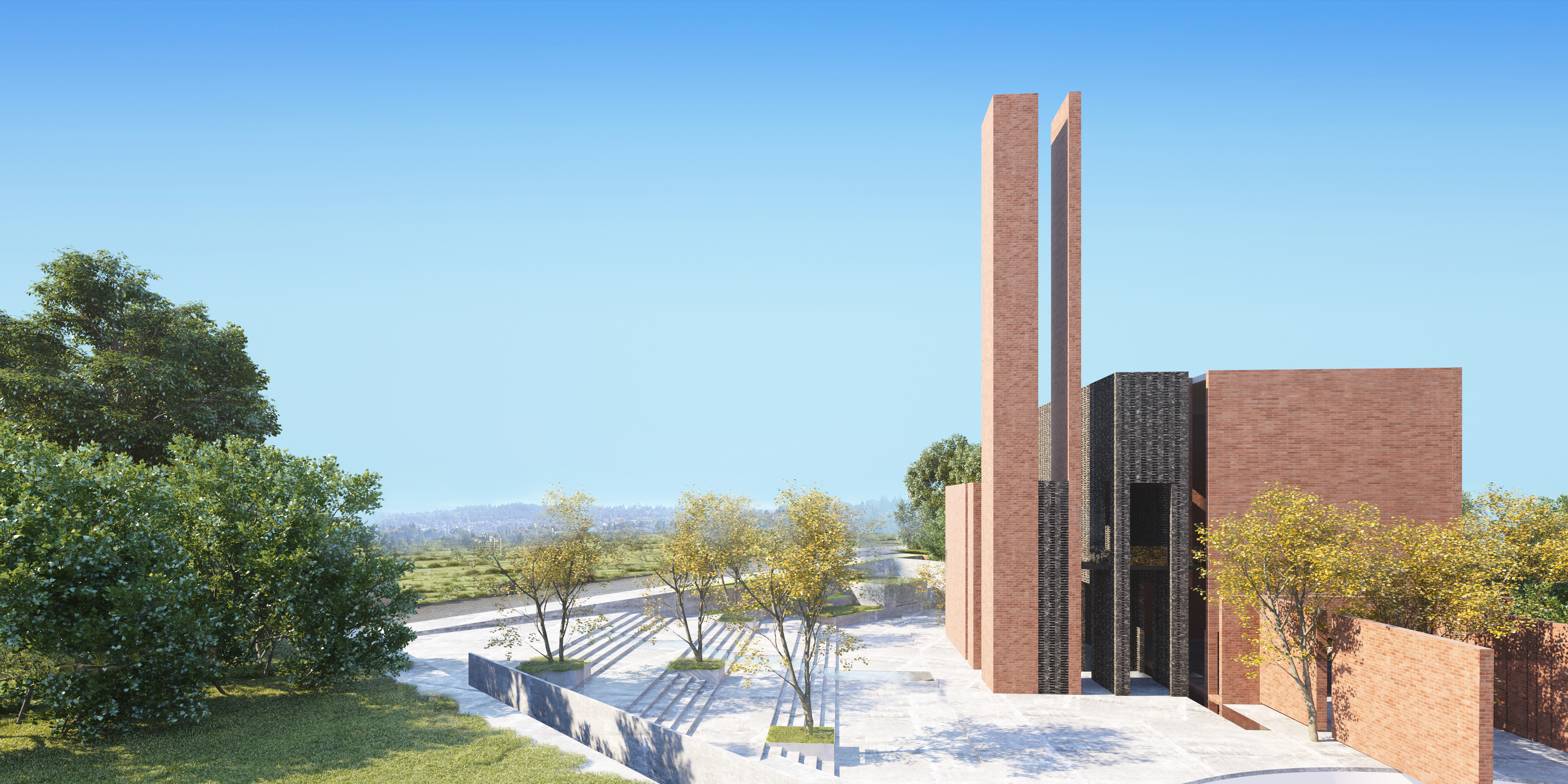 “The forms focus solely on the essence of the religious space,” Fayyad explains. Following the landscaped slope, natural stone stairs contrast a thin concrete slab that spans six metres, forming a canopy. The spaces are kept minimal and simple, in keeping with a reserved approach towards creating a dramatic and awe inspiring place to pray. “The slits and fractures along the Qibla wall enhance the directionality of the space and allow daylight to filter into the prayer hall,” Fayyad adds.

A small volume hosts the ablution space and services, while the middle volume is a dark pathway. “Bricks were arranged to stick out while others were tucked in,” Fayyad continues. Pointing to the array of red bricks covering the exterior, he adds, “This added shadows to the walls, creating visual intrigue due to the depth it provides.” 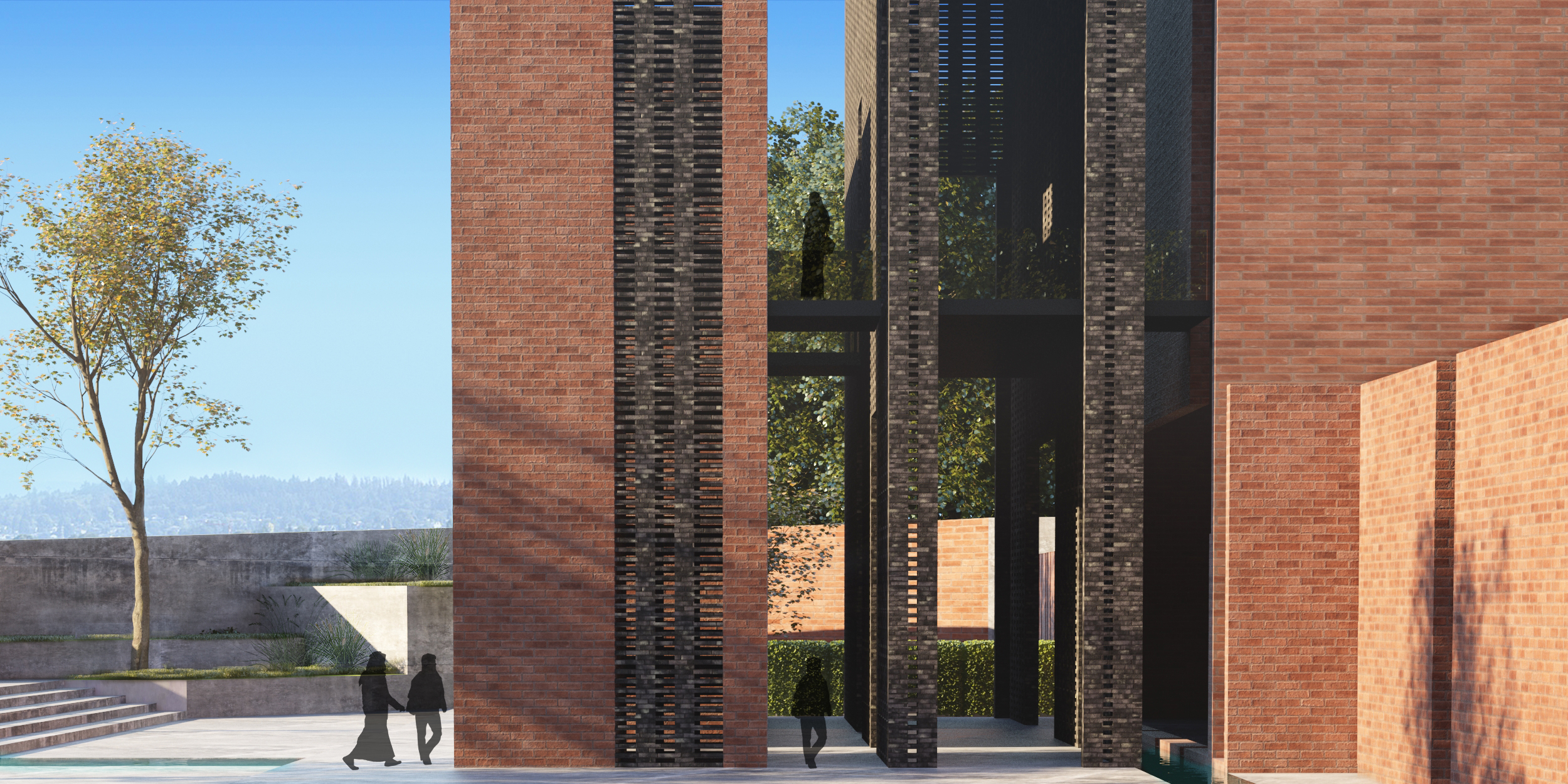 Traditionally, minarets were introduced to mosque designs to perform the call to prayer which was previously conducted from the rooftop. “Nowadays, the only function that remains is acting as a visual cue of the Islamic building within its surrounding architecture,” Fayyad says. This mosque’s minaret functions as a focal point that serves and maintains the minimal approach.  “It functions as a staircase as well, for women to access their prayer mezzanine,” he adds. “For this to be made possible, we had to connect the standalone minaret to the mosque through a bridge that leads to the lobby.”

Ensuring that this path is aptly lit, a full-height vertical cut was carved into it for the sun to get in and guide the worshippers. That being said, a staggered black brick box was added to counter any harsh weather while still allowing natural light and ventilation to enter, delivering a pleasant experience for all worshippers seeking refuge in their spirituality.

Different shades of wood are applied across the open floor plan of this [...]

Flora and fauna have rarely been depicted with the level of serenity as in this [...]
RELATED ARTICLES

Minimalism vs Maximalism: Surfing the Style Spectrum Beyond Aesthetics

Minimalism and maximalism are the two polar extremes of the interior design styles [...]

Colour can make or break a space, it’s imperative to choose just the right tones as [...]

From serial award winners to up-and-coming talents, we look at the women who are [...]

8 Talks Not to Miss at 'Cairo Design Award' De-Forum