Is It Art? Is It a Toy? No It’s Not Toys: Egypt’s First Art Toys

“Have you seen my bear?” asked my 34 year old brother inquisitively.

“My pink and yellow bear? One of them is missing…”

“No, what are you on about? Oh those plastic toys on your shelf. What about them?”

“They’re not toys, Timmy! They cost me like 500 sterling! They’re Bear Brick!”

Context in design, much like life, is important. An adult man who collects figurines or perhaps one that designs cute bear toys for fun… well your assumptions would most likely lead you to 40-year-old virgin territory. However if I told you they’re not JUST toys, they’re vinyl collectibles or art toys or designer toys and this hobby feeds into what’s a multi-million pound global industry, perspectives change, it becomes cool. And cool is at the epicentre of this burgeoning trend which blossomed in the late 2010s mainly thanks to ‘Hypebeasts'.

Hypebeasts are usually millennials obsessed with streetwear and contemporary artists. They can often be spotted casually rocking a Supreme t-shirt, custom air-jordans and still playing Nintendo 64 un-ironically. My brother in his outburst, was referring to the immensely popular Be@rbrick designer toy. The collection of paunchy bears with articulating limbs was originally created in 2001 by Tokyo based Medicom Toy, now one of the world’s leading manufacturers of designer toys with some products selling for up to $30,000. 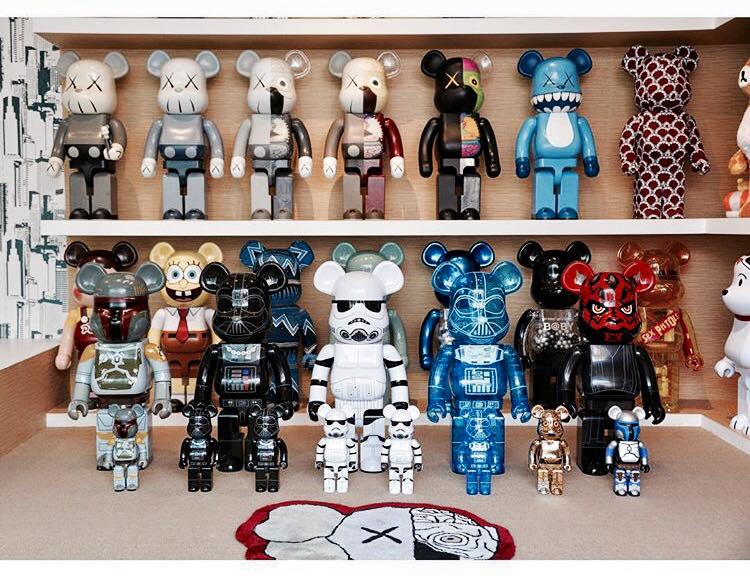 A collection of Medicom Toy Be@rBricks

Street artist Brian Donnelly AKA Kaws is arguably the most famous catalyst to blur the lines between art and toy with his morbid-but-darling Mickey Mouse–inspired pieces known as ‘Companions’ that were first introduced in 1999 before being mass produced. They currently average at around $3,000 in price for a foot tall figurine with his rarest pieces regularly being auctioned for millions.

If you want to go even further back to the roots of the movement you can look up Hong-Konger Michael Lau’s wikipedia, labelled as the ‘Godfather’ of vinyl toys. 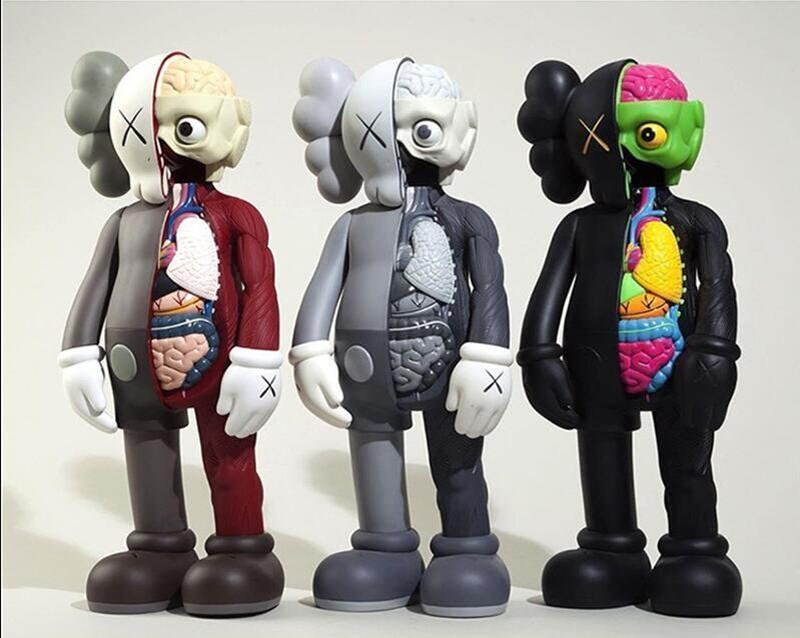 I think that’s enough context for me to segway into telling you about an Egyptian brand, the first of its kind in the Arab world following in the footpaths of the aforementioned artists creating something quite similar, except they’re actually Not Toys. 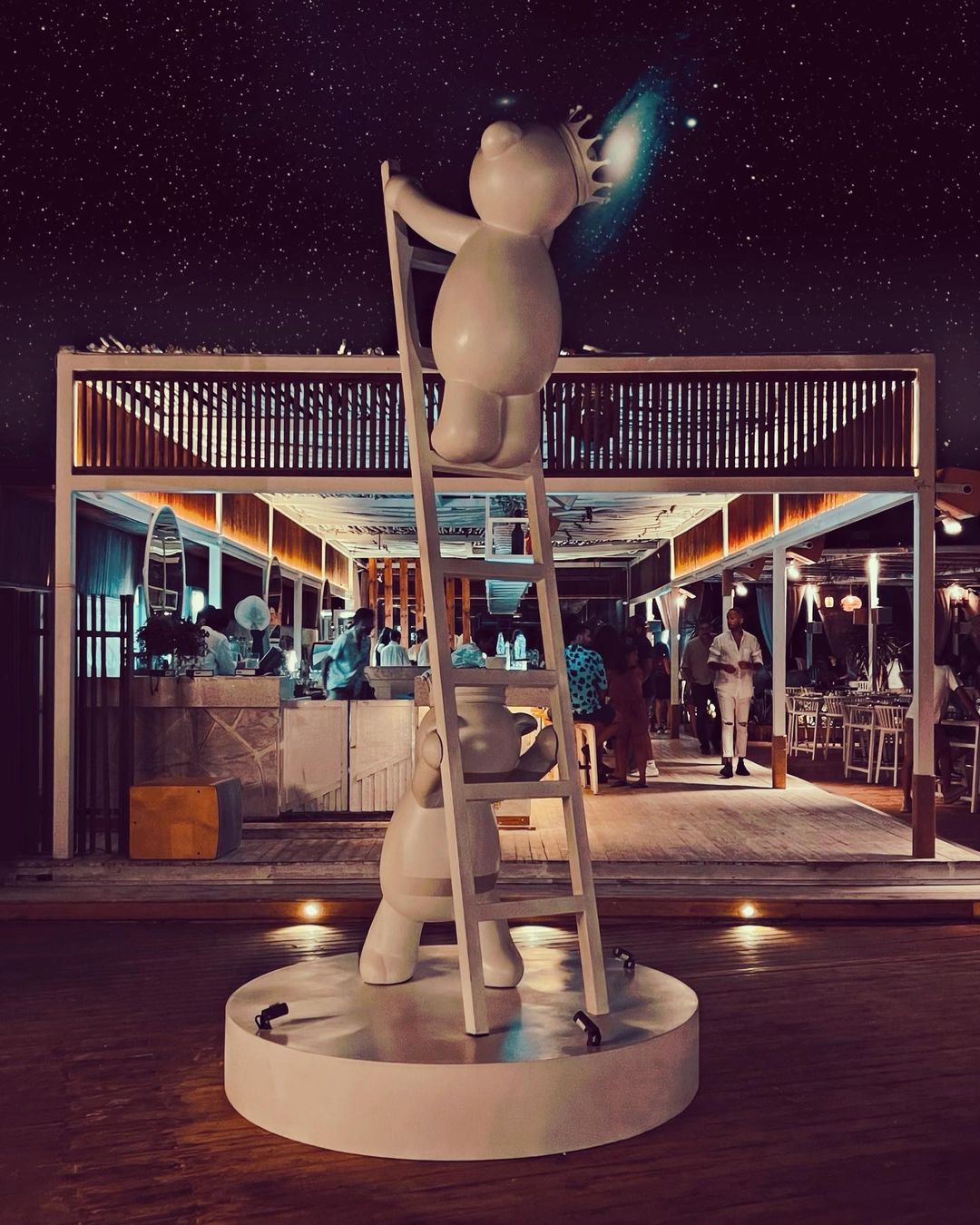 “We have always been passionate about art and design overall but had a particular interest in sculptures and art toys,” Khalifa - an avid collector himself - tells me. “We found that collectible toys are not very prominent in the region so we wanted to create something completely unique.”

There’s an unfathomable coolness, cuteness and curiousness about the NotToys signature ‘Fudge’. As is often the case with designer toys these pieces are unmistakingly not for kids, this isn’t an interactive McDonalds happy meal toy or a Hasbro Potato Head. These toys tend to deal with loftier and deeper concepts including sex, death, loneliness and aspiration. And the blank facades of Not Toys’ almost allows you to project whatever you want into their ambiguous activities. ‘Flying Fudge’ is being lifted off the ground by a single balloon, ‘Courageous Fudge’ is battling with an out of control ladder while ‘Charming Fudge’ bashfully hides a rose behind his back. These Fudges come in a variety of colors and textures with sizes ranging from 30cm to 2 metres.

“We created an abstraction of the absolute world in which we live that was more utopian,” Khalifa says, describing the design process of the Not Toys alternative universe. “While putting the story together we came up with Fudge along with all the symbols that accompany him in the collection, like the crown, the rose, the ladder and the balloon, each of which represent a basic human desire. We wanted to make the items familiar and relatable which is why we adopted a minimalist approach to the design, making our products fit in aesthetically in any space at any scale.”

Whilst Fudge’s form may look relatively simple it was in fact two years from the first sample and countless iterations until it evolved to the appealing proportions you see today. ‘The Mighty Fudge’ - which is the character at its rawest form without additional elements -  is the one piece the team agrees is their favorite having worked so hard to construct it, with their backgrounds in design fueling the progress. “Architecture teaches you to go through a process and look at things at different scales from macro to micro,” says Khalifa. “An architect takes pride in designing at any scale.” 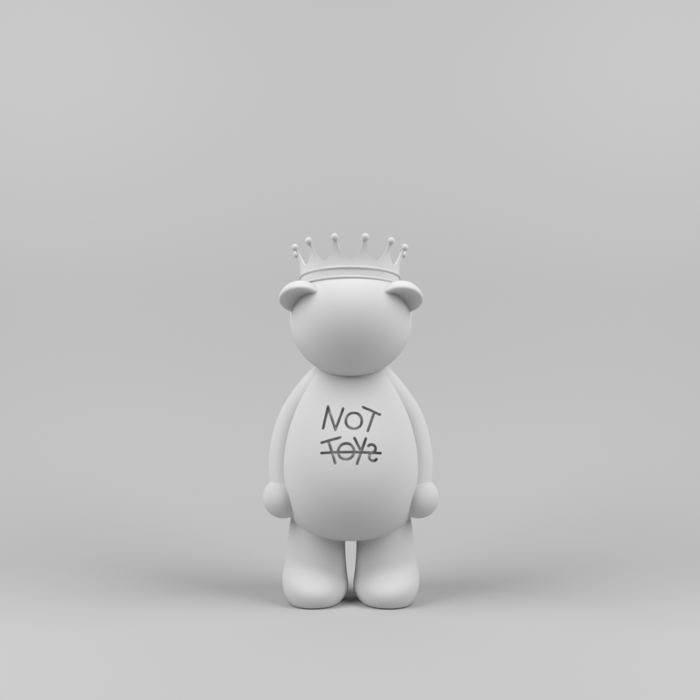 Naturally, at an average of 5,000 EGP per piece, not everyone in Egypt is automatically on board with the concept. “We are faced with a challenge that is explaining to the public what a collectible art toy is. Some get it and some don’t, which was expected, but this is a part of our journey and the growth of our brand in the region.”

Despite their high cost in relation to, say, a traditional playable toy figure, there’s a huge accessibility to them in relation to the art world - they’re visually delightful, extremely decorative and there are few and far pieces of original art you’d be able to afford which both add unique character to your space and act as a status symbol too.

Not satisfied with just taking Fudge on an adventure, the team have plans to expand Not Toys into a fully fledged lifestyle brand in the future including fashion, jewelry as well as home accessories.

Not Toys products currently retail online through www.nottoys.wtf and will soon be made available at concept stores across the world.

SceneNoise's original docu-feature is a 16-minute dive into the mind of one of [...]

9 of the Most Beautiful Hotel Pools in the Middle East

The Middle East is blessed with an almost all year round heat wave that just begs [...]

Bunny shaped dining chairs, sleek consoles, and kitchen accessories made out of [...]

Minimalism vs Maximalism: Surfing the Style Spectrum Beyond Aesthetics

Minimalism and maximalism are the two polar extremes of the interior design styles [...]

Marvelling at the Magical Interior of The Museum by Nihal Zaki