Whether its romantic florals or shapes that teeter between art deco vibes and ‘60s chic, Wally’s Wallpapers does it all with eco-friendly ink.

Many turn to wallpapers to create new realities inside their homes, especially with all the time we’ve spent indoors recently. Some go for maximalist eye candy and take a trip into tropical art deco nostalgia, while others opt for elegant botanical collages of delicate leaves that cascade throughout. Bringing these kinds of bold, bright and fun wall coverings into Egypt, artist Fafwa Attia launched Wally’s Wallpapers in 2019 to help give homes that extra spark.

“I woke up one day and I knew I had to make wallpapers. My husband gave me a few weary looks, but I was certain this was it,” Attia tells SceneHome. The epiphany hit her after a stop-start career that ranged from advertisements and creative direction, along with newspaper caricatures and an education through art workshops. She started on her own and has now developed a successful brand which Egypt’s designers and architects rely on for its architectural bombast. Attia took some time before taking credit, but after their work at the latest Cairo Design Award which presented a look at the future of wallpapers with animated birds and leaves, and their finalists nomination at Obelisque Design Award for their abstract Khedive Ismael art, credit was imminent.

Attia’s career got caught up with life’s most precious and unequivocally reorienting elements, family. “When I started one of those endeavors and started to gain momentum, I was blessed with my daughter,” she shares. A darling that will later on - when Wally’s is launched - claim her mother’s business as her own kingdom. The founder knew that she had to find a line of work that comes with flexible hours and began designing frames before being hit with that epiphany. “I noticed that wallpapers in the market were mainly repeated motifs and there was certainly more to offer. It felt right because I was always into set designs and got the chance to work on a couple of movie productions.”

With her path set, AttiaI reached out to former colleagues to figure out how to source materials and machinery. That was facilitated by the fact that wallpapers aren’t far off from advertisements. Around this time, she also managed to source the right type of paper and began designing wallpapers. Slowly, but surely, she was building her business and brand. 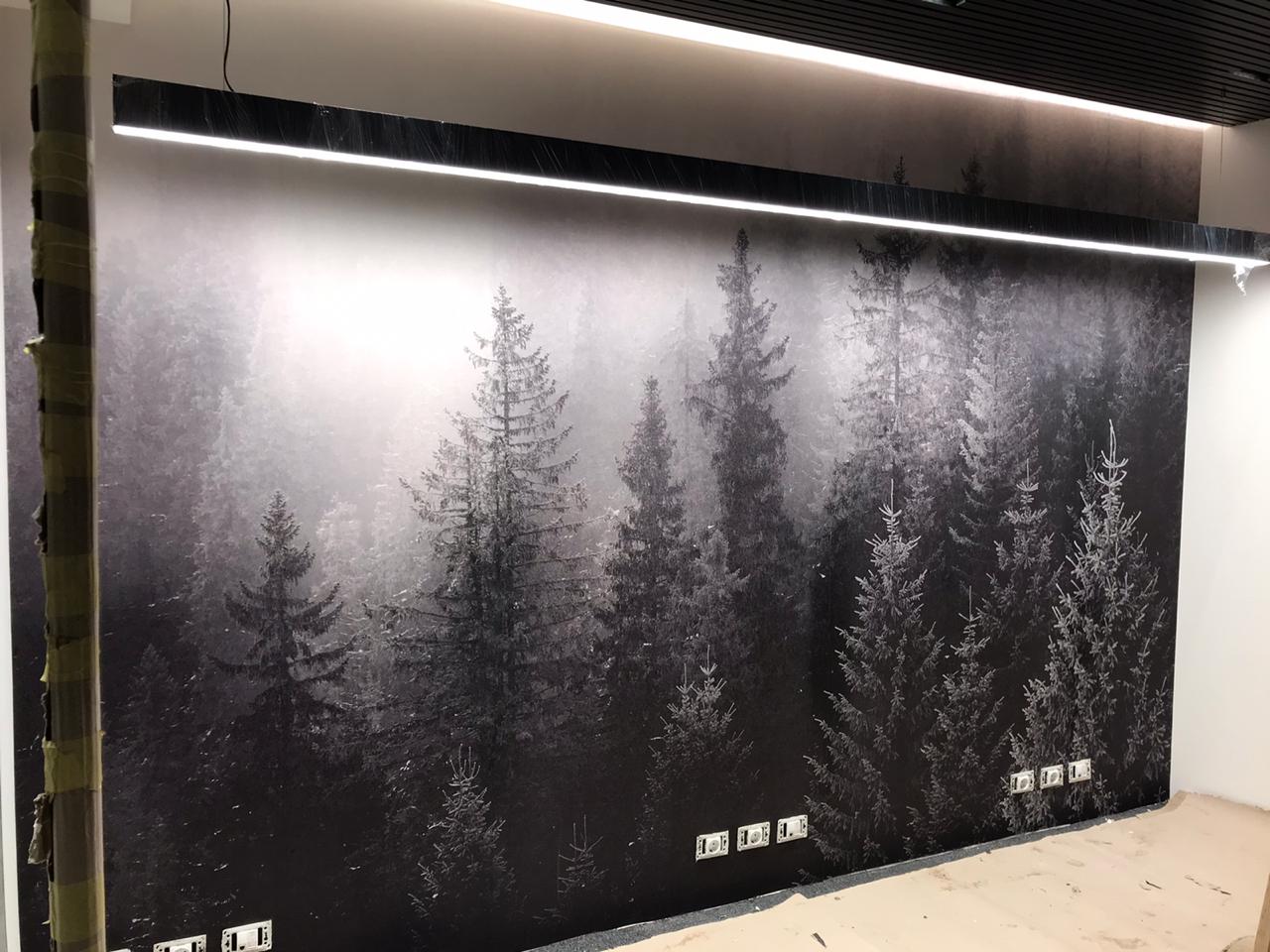 “It was tough in the beginning as we were low on resources, but with time, our work started to get recognized,” Attia says. She decided to make her business more sustainable by replacing the machines with others that use eco-friendly ink, which made her process more kind on the environment. As demand started to grow, a certain clientele made the paper artist want to become, quite literally, more clean. “When we started getting a lot of hospital requests, our contribution had to go beyond bright and fun visuals. So we started using antibacterial finishes, which reduce the bacteria lingering about,” Attia says, describing ‘Little Wally’s’ collection of fun art designed for young children. This way animals on hospital walls are more approachable, unlike how they are in real life. Unless you’re Tarzan.

“We like working with designers from as early as the concept stage, to get a feel of the design so that our wallpapers blend in and even elevate the aesthetics,” Attia explains, referring to her work on Casaletti, a furniture showroom in City Centre Almaza. Minimal leaves dictate how the space both looks and feels, while abstract outlines are similar to the minimal lines art installed in MO4 Network’s boardroom and, recently, SceneHome’s Home.

Attia’s biggest challenge came during the most recent Cairo Design Award when she decided to get innovative and imagine what the future of wallpapers looked like. “The next step was to animate our designs so that the flowers, figures and shapes can move and come to life,” she says. Participating in design events didn’t end there. Her most recent appearance - one that marked a shift in how she positions herself around her brand - was in the Obelisque Design Award, in which Wally’s Wallpapers was a finalist in the materials category.

“It was one of the first times that I actually came under the spotlight,” Attia says. “For long I remained distant as I did not want to associate myself or get much credit. Once I was sure that the brand was established and is on its feet I decided to come to the forefront.” Here she refers to her installation at ODA, which depicts Ismael Pasha, the Khedive of Egypt, with a backdrop of three iconic Egyptian mosques mixed together in an abstract, intentionally random, manner.

“I started it all on my own and now there is a team and a full grown business,” Attia says. While it did take her time to start accepting credit, it is well deserved. For this artist’s journey is all about persevering through life and striving for goals. Attia did that with flair, colour and a ton of tropical flora.